Lately I have had a “real hankerin'” (as Howard on Big Bang Theory would say) for cinnamon popcorn.  I have looked all over for it but have turned up absolutely nothing. Fine, I said to myself, I’ll just make my own.  I came up with this on the fly and it turned out pretty darn good. 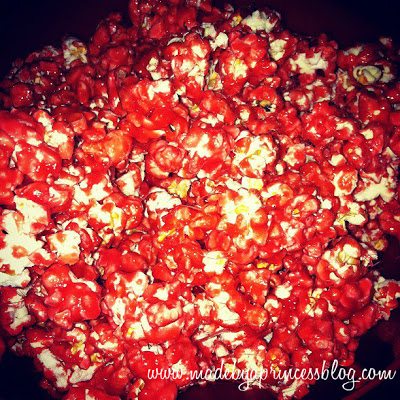 Ingredients:
1/2 cup butter (one stick)
1/2 cup Karo syrup
1/4 cup sugar
(2) 7oz bags Jolly Rancher Cinnamon Fire candies
1 tsp cinnamon extract (I think I probably added more like 2 tsps but start with 1 tsp and see how you like it)
1/4 tsp cayenne pepper (this is completely to taste, I like it kind of hot so add more or less to taste)
1/4 tsp baking soda
Large cookie sheet full of popped popcorn (My cookie sheet is about 20″x15″)

Melt butter, syrup, candy, and sugar in a saucepan on medium-high heat until everything has melted together.  Turn heat down to medium and slowly add the cinnamon extract and cayenne.  Do a taste test and determine whether you want more extract and/or cayenne.  Once you are happy with the flavor add the baking soda and gently stir until well incorporated.

Slowly pour the mixture over your cookie sheet of popped popcorn, doing your best to spread evenly and around all of the popcorn on the sheet.  You will have to work quickly because it will start to harden pretty fast. I used a wooden spoon to mix and coat.  Pop in the oven for 15 minutes.  Pull out of the oven and with a spatula carefully fold the popcorn on the cookie sheet so that the cinnamon mix coats all the popcorn.  Bake for another 10-15 minutes. Repeat the process one more time by folding the popcorn around on the cookie sheet to evenly coat all the popcorn. Bake for another 10 minutes then remove from the oven and let cool.

I used Jolly Rancher Cinnamon Fire candies because that was all the store had but you could use Brach’s cinnamon disks or a couple bags of cinnamon imperials.  I used the extract because I really didn’t think the mix had enough of a cinnamon flavor without it and the cayenne really brought out the heat which is one of the things I love about cinnamon things. It is kind of addicting…you’ve been warned!